Today there seems to be some light at the end of the tunnel, I managed to get things done in and around the house. Houskeeping has been hard. In Rotterdam I could not manage to do everything properly, so all dust was moved to Lelystad too. A year later there is still some dust from Rotterdam, but some of it is gone now....

Spended the evening with editing and uploading the photo's I took last Thursday.

20070125 Chimay, Gladdich and Frank
Two happy Chow Chows are sleeping on the floor, waiting for Frank. On Mondays he plays bridge. He started again last May, to have at least one evening for his own pleasure.

There seems to be a bit of progress in my mood today.
Even Chimay, she is the mirror of my mood, seems to be content.
Last night I was restless for a short while when I went to bed, but this morning I woke up easier as the past days.

The weather is a bit better too, cold and sunny, much better as the ongoing rain and overcast we had for some time. Real Chow-weather, Chimay and Gladdich spend most of their day outside in the garden.

Took the bike in the afternoon and went with Chimay, she was very content to be running next to the bike again. And of course it is a treat these days to go with me alone, without Gladdich. 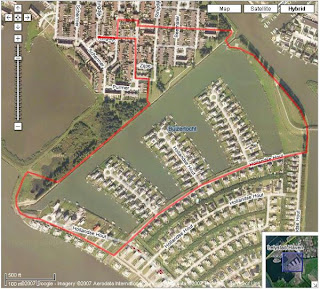 in red our route; view the Google Map of our area
at 19:42 No comments:
Labels: Chow Chow, depression

Today the first day with the new med, Remeron. Took the first one before going to bed yesterday and slept like a baby. Frank had to wake me up, because Gladdichs whining did not wake me. And it took a long, long time before I felt awake, in all honesty I still feel a bit like I am sleeping.
Very positive: I can drink my coffee again in the morning. Could not cope with it the last weeks because of the nausea.
Taken the Chows for a walk and backc home I surfed the internet, from Remeron to noradrenalin, serotonin, endorfin, sef-injury to borderline personality disorder.

Yes borderline, that was the diagnose long time ago.
Last month I was back in it, the full blown rollercoaster called BPD and now I am tired, so tired.
at 14:35 No comments:
Labels: borderline, depression

Today Gladdich performed his first task as PSD (Psychiatric Service Dog), and he is only 4 months now!

I had a major breakdown/panick attack, was very upset and only could cry. Gladdich jumped on my lap, started licking me, pushed his whole body against me and calmed me down!

We are so proud of our boy.
at 14:53 No comments:
Labels: depression, psychiatric service dog

All trouble from weaning off the meds are back: nausea, dizziness, overly sensitive to noise and images (can't even look at the TV), those tiny little electric feelings through the whole body (like the electric you feel when you bump your ellbow in a certain way) and tired, but not able to sleep.

I hope tomorrow is going to be a better day!
at 21:22 1 comment:
Labels: depression

Gladdich the Grey celebrated his four months yesterday.
Time flies, where is that little puppy gone?
He grows like weed...
Yesterday the weather wasn't good enough to take pictures. But it was good enough to go to the Zuigerplas-wood and have a good walk. Chimay and Gladdich had a good time.
Today it looks more like it, some sun, although there is still a lot of wind blowing. But it is better, we had all week clouds, wind and rain. Even Gladdich got enough of it and is today a lot happier.

On our morning walk Gladdich even went into the pond, just wading and jumping through the water.
He thought it was a lot of fun. Chimay looked fairly annoyed by his puppy antics...
View all photos from our morning walk

The afternoon we spend in the garden, again taking pictures.
Gladdich likes that, but Chimay does not... But I managed to get them together on a picture. Gladdich is nearly as big as Chimay!
View the afternoon pictures

Then we got unexpected visitors. Selma came with Whoopi and Misty, they are smooth Chow Chows too. Whoopi is black and 4 days older as Chimay; Misty is blue and a month younger as Gladdich. They had fun together in the garden. And everybody was happy when we went for a walk again!
View all photos from our afternoon walk with Whoopi and Misty
at 13:18 No comments:
Labels: Chow Chow, friends

On Saturday I had an overdose of people.

Somehow an organised walk went along a part of our daily walking route. Unable to change my routine, we had to share the path for 50 meters or so. Because Gladdich likes people a little too much (he runs towards strangers, even jumps up to get attention), I had put him on leash to prevent these things from happening. But the walking gang almost walked over Gladdich and walked me from the pathway... depressing...

It was even worse than I thought at first, I was walking with Frank and the Chows that afternoon and two boys ahead, next to the path made me panick and change the route.

I must say verything is worse at the moment. In December I started to change my medication, after years of using Seroxat (named Paxil in other parts of the world), it did not do much good anymore. It never worked well against my phobias, but it did keep the depresssion away. But I became more and more inactive, not able to break the journey downhill.
Especially with a pup in the house the inertia became painfully clear.

Slowly stopping with the Seroxat and after that started with Lexapro. Chimay had a clear opinion about the new medication: NO GOOD at all (I really should rely more on my Chow Chows and their opinion!), she did not trust the Lexapro. But I was thinking these are just adjustment problems, just go on a bit longer and it will go away!
So the December month became a psychic rollercoaster, changing moods within the minute, opposite feelings at the same time, no hunger, eating like mad, extremely phobic and getting depressed. Cosulted my psychatrist, try a higher dose, but that was no help either.
After visiting my psychatrist earlier this month, we decided to slowly stop with the Lexapro. The mood changes are getting less frequent, not within the minute but in within 5 minutes now and again lethargic, extreme sensible, phobic and depressed.

Going to try the next medication somewhere at the end of this month.
at 14:28 3 comments:
Labels: agoraphobia, depression

Finding a comfortable place to sleep is important!
Chimay was our first Chow who dared to use Franks chair. The Chows before her only came there when Frank was there too, for a comfortable rest on his lap.
But Chimay decided one day it would make a nice place to rest.
She does not complain when we send her away, so we agreed.

The chair was also a good hiding place to keep away from Gladdich. Unfortunately pups grow, grow fast, so the day came that Gladdich could climb up there too.

Gladdich came up and conquered...
I am not sure they ever imagined this use at Montis, when they started to produce Gerard van den Bergs design...

His grey fur does match on the red!

Chimays color is a better match with the couch, an other favourite spot.

Her greatgrandmother, Pandora, used to lay there too.

Gladdich is learning to sit quietly on Franks lap, although he starts with washing his head...

a rainy, but enjoyable day

I, Chimay aka myself, am feeling better today, finally the heat is over and I am able to take care of my mom again. As long as these hormones rage through my body I am not much of a psychatric service dog...

What's that a PSD you ask?
Good question, but not easy to answer.
It is a long tradition here at home, but my mom never knew there were more dogs in the world doing the same job. She found some others through the internet and realised we do the same.
Well, myself does the same and Gladdich is still learning.

Like the Chows (and others) before myself, we try to warn mom if she gets too stressed, or gets near a panick attack. If she faints, because she was stressed for too long, we sit next to her, watching over her, maybe lick her face until she comes back.
We accompany her when she wants to go out, amongst other mental issues, she has servere agoraphobia and without us she would not leave the house.

But back to today, we had a nice walk this morning, Myself could walk off leash again and Gladdich was happy romping around. He is a nuisance at times (those nasty sharp puppy theeth!), but I think he will grow up to be a helper for mom too.
And in the afternoon we walked with the whole pack, dad included! I love it when he goes with us, he takes care of mom and we can freely sniff and run around.

Now we are back home, I crashed on the couch and Gladdich on the dogbed, two happy Chow Chows.
at 18:21 No comments:
Labels: agoraphobia, psychiatric service dog

10 more nights to sleep and I will be 4 months old!

my official name is Bruichladdich Blu of the Royal Club and I was born at September 13th, 2006

Together with Chimay I am going to write some on some days.
Well this is way enough for today, see you!
at 20:43 1 comment:
Labels: Chow Chow, intro

well a new year has started, time to do new things too.
Chimay and Gladdich have their own Blog now...

together with her humans Frank and Anita and Gladdich a blue smooth Chow Chow, who will indroduce himself in the next post
at 20:23 No comments:
Labels: Chow Chow, intro
Newer Posts Home
Subscribe to: Posts (Atom)