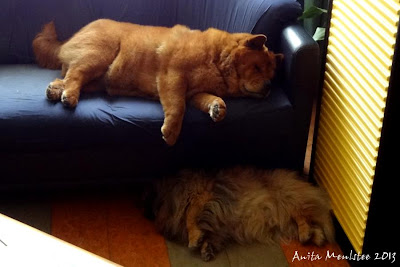 De last tulips are blooming, this is my favorite tulip 'Groenland'. I planted these last fall at a rather shady spot, so they came up late. 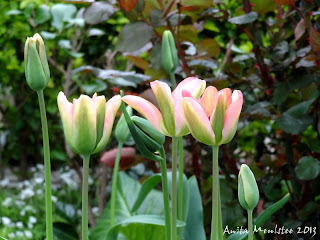 I thought I had lst my Iris Germanica. It was in the garden when we came here, but got lost when we changed the garden. But to my surprise it came up in an other corner of the garden, where was too much shade, so I replaced it to a more sunny spot. This year I was rewarded with many flowers! 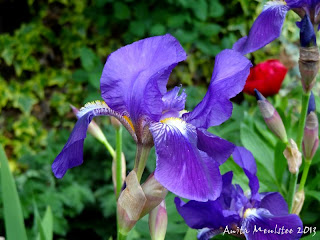 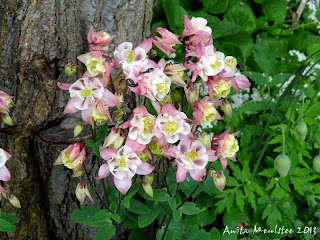 After my walk through Niedersfeld and a good breakfast, we went on our way to Frankenberg. A surprisingly beautiful old town, first we visited the Liebfrauenkirche.

a gorgeous beast cut out of a stone near the entrance

tombstone of Caspar Tholde, 16th century with a pentagram on the top

A lot of the art that once was in this church was destroyed in the Reformation in 1606, but a few sculptures of Tyle von Frankenberg (14th century) were spared. Here pictures of the statues of John the Baptist, an apostle and Christ.

The stained glass was mostly destroyed too, the few remaining windows look pretty.

And there was more: a richly painted ceiling, a very special organ (20th century) and art by Ansgar Nierhoff, sadly I have no pictures of his art.

After all nature of the past days it was good to see some culture ;-)

frontside of the townhall with Lady Justice and a clock

We had a cup of coffe at restaurant "Die Sonne Frankenberg" on the townsquare next to the town hall. The employees were baffled by these strange foreigners who kept sitting outside when it started to rain... But we were dry under a parasol.

After tis little break we drove on to the Edersee

saw a bit of the roof of Schloss Waldeck

Back in Niedersfeld I finally wanted to know what was behind my initials... We had passed here a few times.

Oh, stupid me, I should have known: Ave Maria.

Looking inside is a bit disappointing after all the beauty we saw in the Liebfrauenkirche in Frankenberg!

Last picture of our short vacation, Frank, Chimay and Ari at the Hillestausee, whrer we had again a nice walk.
at 22:00 No comments:
Labels: Germany, vacation
Location: Frankenberg, Duitsland

Midweek in Sauerland, part 3: a walk through Niedersfeld

Niedersfeld is a beautiful place, this is the view in the morning, when I walk the dogs.

Today I walk to the village to get some bread and take some pictures. This path goes down to Niedersfeld.

timbered house (fachwerk) on the other side of the street

with words on the beams

A beautiful example of the typical slate shingles on roof and walls.

A house with partly slate shingles on the wall and partly timbered.

We got a tip of a friend, when she heard we were going to Winterberg: with the cable car to the top of Ettelsberg in Willingen would be worth the visit.

The dogs would be allowed in the cable car and walking down would be possible, even for Ari.

So on Wednesday we drove to Willingen and we bought tickets for the cable car.

Ari is a bit afraid of heights, so he was not too happy...

But on the other hand Ari is very curious too, so he did look outside for a moment.
Brave Peke!

Nearly at the top there is the Hochheideturm.

The view up in the tower is truly amazing!

Chimay up in the tower.

Glass in the floor, so you can see down too.

Frank, Chimay and Ari next to the cross that marks the highest point of the Ettelsberg: 838 meters!

Ari had a great time when we walked down.

I had Chimay on leash, so I could not take any more pictures.

The path went from left to right with hairpin bends, but Ari took here and there a shortcut straight down and came proudly back to pick us up ;-)