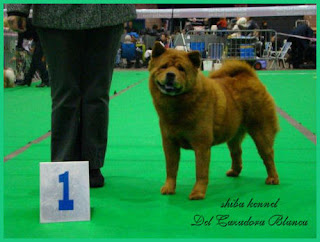 Yesterday at the show in Leuven (Belgium) Demi (Xin-Feng's Demeter) got BOS, with this win she got the last needed point for her Belgian Championship!
Congratulations Ilone and Demi, sorry Demi I will write down your complete name with titles: Neth. & Belg. Ch. Xin-Feng's Demeter Neth. Youth Ch..
at 15:50 No comments:
Labels: D-litter, dog show

Today Chimay is celebrating her sixth birthday.
Her littermates from our C-litter too, Happy Birthday Cajou, Chow, Cheina, Castro and Ginger!

To celebrate this special day, a few pictures of Chimay from the past year. I have not many pictures to choose from, as Chimay does not like to be pictured...
This was really a lucky shot, Chimay and Eoos playing in the garden. 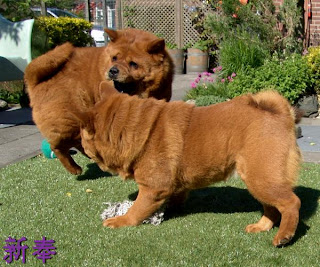 Chimay is not very playful, she does it maybe once a month for five or ten minutes ;-) June 17th I was lucky, I had the camera in my hands when Chimay and Eoos started to play. 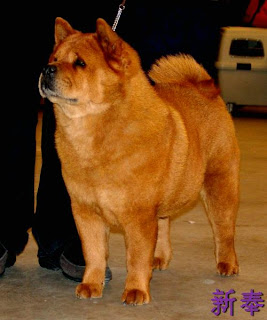 Chimay at her best, perfectly groomed for the show in Groningen, March 6th, 2010. 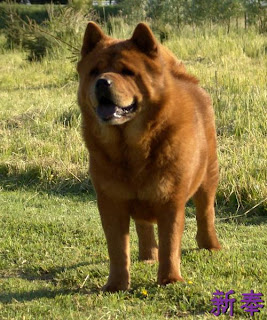 Teija of kennel Basstrick's in Finland mailed us that Molli (Xin-Feng's Eki) got a litter of 7 at October 15th. On the picture is the sire Casper (Fin Ch Sherae Billi Billeri). 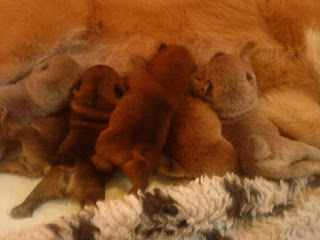 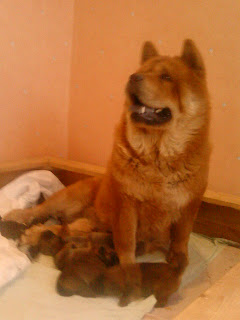 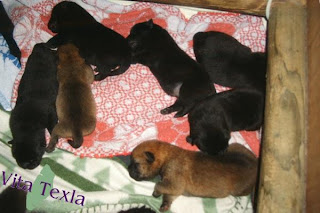 I will enjoy all puppy pictures in the next weeks!
at 22:24 No comments:
Labels: Chow Chow, E-litter, pups 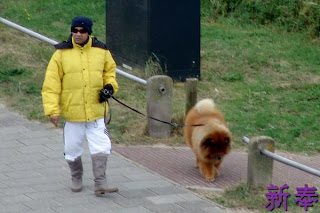 Monday we went to Noordwijk, where Mr and Mrs Choudhuri from Berlin (Germany) enjoyed a short holliday on the Dutch coast. Of course Angel (Xin-Feng's Angel) came with them, the rough dog from our first litter. Twelve years old, but still going strong. He does not walk very fast and is a bit stiff in the joints, but otherwise in good condition for a twelve year old Chow Chow. It took a bit longer than previous times before Angel recognised us. 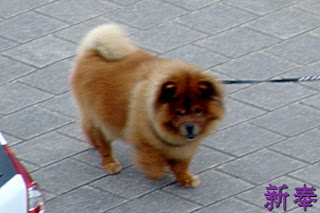 The pictures are not great, I took them from the appartment on the 4th floor.
Mr Choudhuri just went for a walk with Angel when we arrived, so I went to the balcony to take a few pictures.
It was a nice afternoon. We kept our gang in the car until Angel went to the balcony to get some sleep. Then Ari made sure he was the center of all attention, he really LOVES human attention! Angel was happy to stay away from all the fuss.
at 21:34 No comments:
Labels: A-litter, Chow Chow

Today I released a large update on the Xin-Feng website.
The lay-out is changed so the website and the weblog have more similair looks. And I rewrote the website in valid XHTML.
at 14:02 No comments:

two Excellent and one Very Promising

Last Thursday I took my camera with me to our handling class, to take pictures of the three dogs Valentina and Marijke took to the show in Zwolle. All three were first in their class!
From left to right:

The weather was not great for taking pictures, but I tried to take a nice one of each, Hella, Stella's daughter: 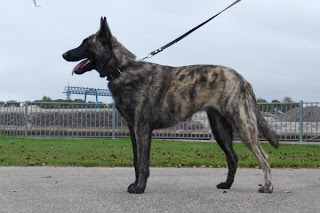 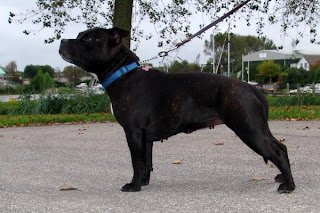 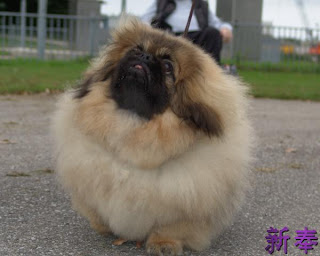 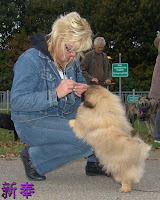 For a few goodies he might do something. But he was still avoiding the camera. Back to Valentina for a goodie and some cuddling! Since the show in Zwolle Valentina is on Ari's list of favorite people too.

Finally I took some reasonable pictures, but Ari shows that he did NOT like it 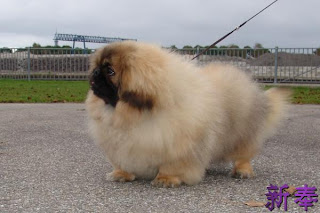 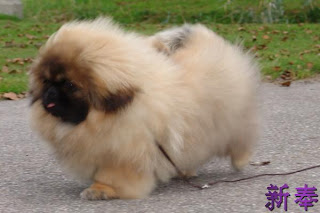 Ari was happy to be home again! 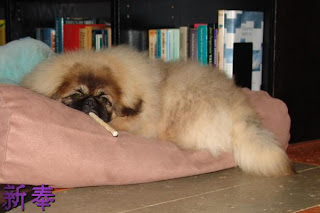 Ari at the dogshow in Zwolle

It has been a while since I wrote here.
The past weeks I have been busy redoing the website, new lay-out... patience, it is nearly finished...

And Ari keeps me on my toes, the Chow Chows are stubborn, but Ari... is even more stubborn AND he is smart!
Keeping up with his coat takes some time too, but our cooperation gets better each time I brush him. 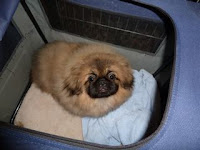 Last Saturday, October 9th, Ari went with Marijke and Valentina to the dogshow in Zwolle. Marijke handled Ari too at the FlevoDogMatch. Because Frank and I can't do it, a day at the show is too tiring for Frank and too stressing for me, it is nice someone else wants to take Ari to the show. So Ari was put in his bench and on his way to Zwolle he went!
Leaving behind a flabbergasted Eoos, what was going to happen with Ari? She just recently started to play with him and now he was leaving?? 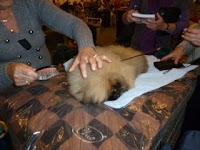 The other people with Pekingese dogs at the show were very nice and attentive, here one of them is brushing Ari, so he will look his best when entering the ring. 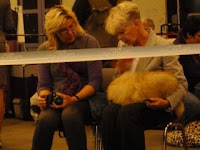 Valentina and Marijke with Ari on her lap, at the ring side. 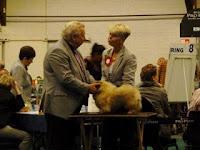 Ari at the table in the ring, it was a pity that the German judge Jungblut was very short about Ari: 4,5 MON. ALTE BABY ANSPRECHENDE KORPER GUTER KOPF, qualification Very Promising 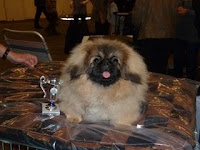 Ari with is bowl for Best Baby of the Breed! 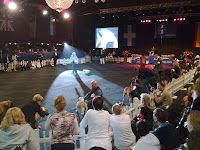 Ari en Marijke in the spotlight for Best Baby in Show

Early in the evening Ari returned with his first bowl :-)
Eoos was VERY happy her friend came back! Ari was happy to be home and exhausted after a day from home. 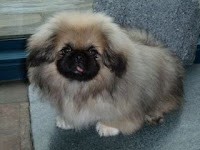 Thanks to Marco & Jolanda Draijer, owners of Ari's sister Sacha (photo left), for taking and sharing their photos.